Shaklee products have been an important part of my health regimen since 1999.  My experience with the first two products that I purchased left me favorably impressed toward the company and its line of products.

Throughout my schooling and employment, I experienced difficulty with acquiring and remembering information and with learning new tasks.  Despite thriving personally in the academic environment and trying to learn, my academic record was mediocre, at best.

My lengthy search for an explanation to the academic difficulties lead me to read Smart But Feeling Dumb by Dr. Harold N. Levinson.  His descriptions of the dyslexic symptoms found in his patients matched my own with close accuracy.

Dr. Levinson’s treatments are based upon his research that found that dyslexia is caused by the inner ear and the cerebellum – the area of the brain adjacent to the inner ear – not accurately transmitting information, received from the eyes and ears, into other areas of the brain.  His theories are not accepted by most experts on dyslexia, however thousands of patients have attested that their lives have been transformed by his treatments.

While I cannot contribute to the scientific debate over whether or not dyslexia is caused by the inner ear, I can offer what I consider to be definitive evidence that dyslexia can be treated at the inner ear.  The most compelling evidence for this claim can be found in my response to the use of lecithin by Shaklee.

I was tested by Dr. Levinson in 1998 and 1999, and an inner ear dysfunction was discovered.  A series of prescription and non-prescription medications were given, of which one was lecithin.  Over the course of the following number of months, the medications were commenced in succession and increased gradually, thereby permitting any improvement to be isolated to a specific medication.  During the time when the medications were being introduced, many of the symptoms of dyslexia abated or disappeared outright.

After taking lecithin for eleven months, it was the only medication that had not produced any identifiable effects.  (Four or five different brands were used, most of which were major brands, while others were brands selected almost at random.)  But this ineffectiveness ended dramatically after switching to lecithin from Shaklee.  This brand of lecithin caused improvements to my balance, walking and handwriting that were scarcely believable.

At both of my appointments with Dr. Levinson, I was asked to stand on each foot alone as a test of balance.  When I did so, I could not stand on either foot for more than two seconds before beginning to topple over.  But three weeks later, after taking Shaklee lecithin for a week, I attempted the test again and was able to stand on each foot alone for at least thirty seconds.  In addition to the results of this clinical-type test, I discovered an improvement to the practical skills of walking and navigating my way through buildings.

Concurrent to the improvement to my balance was an improvement to my handwriting.  I was puzzled all of my life by the uncontrollable problem of watching my hand omit or incorrectly form a letter that I had chosen deliberately to write.  I was a spectator only to the process of my own handwriting.  These errors declined after commencing Shaklee lecithin.

Prior to taking Shaklee lecithin, my need to concentrate on not misshaping or omitting letters during handwriting consumed so much attention that it was detrimental to the writing of exams and essays.  After taking Shaklee lecithin, ideas conceived became easier to hand write onto paper because the mechanics of expression became less constricted and required less conscious effort.

After taking Shaklee lecithin, the black lines and squares that formed a crossword puzzle no longer flashed into disappearance and reappearance.  Concurrent to this change was a decline in distractibility during reading.

The effectiveness of Shaklee Lecithin

Shaklee lecithin is the most effective medication that I use, judging according to the standard of the benefits it produces compared to the complexity of its chemical composition and the ease of its availability.

No other medication, either prescription or non-prescription, has beneficial effects that can be tracked as precisely to increase or decrease in increments proportional to the dosage being raised or lowered.

The second examination by Dr. Levinson was conducted twelve days before I started taking Shaklee lecithin.  The tests conducted were identical to those conducted a year earlier and included tests of eye-tracking, balance, auditory response, reaction time and the blurring rate of moving images.  All of these functions improved later under Shaklee lecithin.  After Dr. Levinson compared the data collected from the two sets of tests, he described my improvements under the medication program as “remarkable.”  I cannot guess which superlative he might have selected from the thesaurus had I been taking Shaklee lecithin at the time of the second testing.

The improvements to my life that were produced by the Shaklee lecithin led me to consider using other Shaklee products.

A Shaklee promotional brochure introduced me to probiotics, under the brand names of Optiflora Probiotic Capsules and Optiflora Prebiotic Powder.  The claim was made that, “[t]aken regularly, Optiflora helps you promote and maintain a healthy colon by supporting the growth of healthy micro flora naturally found in the colon.”

I was prompted to try the product because of an endorsement in the brochure by Dr. Richard O. Brouse, who stated:

“Our clinical experience shows that the longer a person takes Optiflora, the healthier his or her immune system, digestive system and elimination system become.  It is the most economical ’health insurance’ available on the market.”

Taking the combination of Shaklee Opti-Flora Probiotic and Prebiotic produced improvements to my digestive system almost immediately.  My immune system also improved, as evidenced by reduced susceptibility and fewer reactions to environmental allergens.  The improvements were also noticed over the course of the following winter, as colds and influenza declined in frequency, severity and duration.

Opti-Flora prevented instances of minor illnesses that would have otherwise necessitated that I call in sick to my employer.  Preserving my income, by maintaining my health, largely offset the cost of the Opti-Flora.

Comparisons to Other Brands

In A Scientific Watergate – Dyslexia, Dr. Levinson wrote, “only about 5 – 10% of dyslexics report improvements on this substance [DMAE], and fewer on vitamins and related preparations such as Lecithin…”  (p. 297)

When I read this statement, at a time when I was using other brands, I accepted by assumption that my lack of response to lecithin was due to my being a member of the overwhelming majority of patients.

The beneficial effects, that were inarguably associated with the first two Shaklee products that I purchased, resulted in my implicit trust in other Shaklee products to benefit my health.  That trust extends to include those products that do not produce an immediate or noticeable effect.  I subsequently switched to other products from Shaklee, including iron, multi-vitamins (“Vita-Lea”) and vitamin C (“Vita-C”).

If other brands of lecithin or probiotic are on the market that produce benefits equal to or better than those by Shaklee, I have no interest in searching for them.  The merit of the Shaklee products has settled the question as to which line of products is my preference.

Sincere thanks and appreciation to Paul for this very generous and unsolicited testimony.  His attention to detail and thorough explanation of his experiences is testament to the wonderful results he has enjoyed and the quality and efficacy of Shaklee products.  This testimony will also be stored under our “Brag” section (see link above).  -from all of us here at AntiAgingByDesign.com. 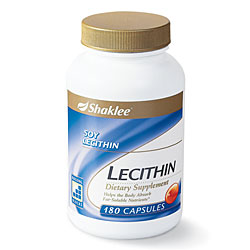 2 thoughts on “Lecithin and Dyslexia: A Personal Testimony”