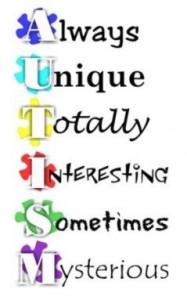 There are both joys and struggles raising a child with autism or who is on the autism spectrum – the same as raising every child. However there are unique challenges with an autistic child and those challenges often frustrating beyond the normal level of parenting.

There is an abundance of information about autism online and I imagine that, together with the materials and support offline are a big help to parents, family members, friends and caregivers. I wanted to share some natural nutrition testimonies in case it can be of help.

Here are some testimonies from the Shaklee family in regard to using Shaklee nutrition to help with autism symptoms.

It is early days yet, but a 6-year-old girl that my granddaughter cares for has had promising results using Mighty Smart.  She is a twin, and their mother was an alcoholic. They both have some learning disabilities, the girl in particular. She seems to show signs of Asperger’s (a form of autism), but that hasn’t been tested yet.

Every day, her teacher fills out a sheet giving her either a smiley face or a frowny face for various skills and/or behaviors during the day. These include how she completes a task, or how much help she needs when introduced to a new task. A few months ago, I gave her a bag of Mighty Smart chews. Cassandra, my granddaughter, reported that she was getting more “smiley faces” on her daily papers. However, they did not order more.

About 3 weeks ago, Cassandra was over and we were discussing the girl again, and decided to order 5 months worth of the Mighty Smart for the girl and the Incredivites for the boy (so he wouldn’t feel left out). At first, I wanted her to give both to the girl, but felt that just using Mighty Smart would be a good way to see if they are helping her in any way.

After 2 weeks of using Mighty Smart, Cassandra reports that, not only is she getting more “smiley faces” on a daily basis, but her teacher actually praised her. Apparently, the class had been introduced to a new “station” on the computer, and the girl was able to do as instructed, without needing additional instruction – unusual for her.

Cassandra also told me that usually, when told to clean her room, she never completes the task, and is easily distracted (not unusual for a 6-year-old). A few days ago, she was told to clean her room, and she completed it without prompting. Also, Cassandra was reading a book to the twins and usually, the boy can get the words and repeat them, but not the girl. This time, the girl was able to repeat the words and actually read them from the book without prompting. Something she has not been able to do before.

As she gets a sheet on a daily basis, we will be able to continue to track her progress. For now, we feel that Mighty Smarts are helping her in her daily life.

The World Health Organization, Institute of Medicine-Food and Nutrition Board, and the American Heart Association all have recently called for increased consumption of omega-3 fatty acids, including DHA, because of their positive effects on health.

Most children do not get enough DHA from diet alone. Studies in the U.S. have found that the majority get only 20-40 mg a day.

I have a Children’s Nutrition Story! I have an autistic granddaughter who just turned 7 years old. She, until recently, was not very responsive or verbal. She would answer in one or two words to a question. She would choose not to look a person in the eye most of the time, and would not follow most requests, seeming to ignore any request.

After a couple weeks on the Shaklee Mighty Smarts (1 a day), Incredivites (2), Meal Shakes (1 AM serving), and OptiFlora Capsule (1) per day, along with a diet where her sugar was greatly decreased,  something phenomenal happened. One day while I was babysitting her, Abi was coloring (scribbling) on a picture from a coloring book, and looked at the crayons before her, wanting to choose another color.

I picked up the green crayon, showed it to her, and said, “Why don’t you use the green crayon.” She put her crayon down, looked right at me, and said, “I like the purple crayon better,” picked up the purple crayon, and continued to color. My mouth dropped open in amazement. Then I noticed that when I asked her to take her lunch plate into the kitchen and put it on the counter near the sink, she followed directions and did exactly what I asked. She dropped nothing, and didn’t crash it into the sink as I expected.

She had less “fits” and they were less severe. Then I noticed throughout the rest of the afternoon that she was speaking in full sentences and looking right at me when she spoke. WOW! I asked her mother if she noticed any changes. She said, “Oh, yes, and so has her teacher.”  Then EZ Gest was introduced as well, because we heard Autistic children are deficient in digestive enzymes. She did very well with this program.

However, later the mother put her back on a sugary and starchy diet, took away the Incredivites, Meal Shakes, and OptiFlora. She is still a little improved, especially her sentence structure and willingness to make eye contact. But she is not doing as well since her supplements have been reduced and her diet has declined in quality. I know Shaklee and diet change together can make a real difference for Autistic children. Just try it! And be patient.

At birth, DHA makes up about 97% of all the omega-3 fatty acids in the brain-and 93% in the retina. To help maintain these levels, kids should consume DHA on a regular basis.

Fifty-five percent of children tested in a study reported in the American Journal of Clinical Nutrition had low levels of vitamin D. That number increased to 68% during the winter months because of lack of sun exposure and an increase in the amount of time spent indoors. Findings such as these have inspired the American Academy of Pediatrics to double for kids its recommended daily intake of this essential bone-building and immune-supporting nutrient.

My son who is 10 years old, was diagnosed with CAPD (central auditory processing disorder) and ADHD (attention deficit hyperactivity disorder) this past summer. He was having difficulties in school (4th grade), his grades were dropping, and he also felt that his teacher did not like him. He did pass 4th grade and was promoted to fifth grade.

During the summer between the two grades I took him to a pediatric neurologist and a hearing center where he was diagnosed with these two problems. The first thing I was told was to put him on medication for the ADHD. This was not something I wanted for my son. After doing research I found that adding protein, a multiple vitamin, and the omegas to his diet should help.

I started my son on Mighty Smart, Incredivites, and a protein shake every morning. After a few weeks with these additional supplements, I asked my son if he noticed any differences. He said, “Oh, Mom, I feel so much better and I can concentrate so much better!” My son is now bringing home A’s and B’s on his report card. I cannot thank Shaklee enough for the changes that I have seen in my son!